Research in Dr. Gray’s laboratory focuses on understanding the molecular and cellular mechanisms involved in synapse development and plasticity throughout the brain. In particular, Dr. Gray’s laboratory studies the regulation of the NMDA-type glutamate receptors that play crucial roles in synapse development and synaptic plasticity. Because of these important functions, dysregulation of NMDA receptors has been implicated in a broad range of neuropsychiatric disorders, including schizophrenia, autism, addiction, Alzheimer’s disease, Huntington’s disease and ischemia. By combining innovative genetic approaches with electrophysiology, imaging, and biochemistry to gain a detailed understanding of the molecular mechanisms involved in the regulation of NMDA receptors and synapses, Dr. Gray’s laboratory is striving to open new frontiers for the development of disease-modifying therapeutic approaches for complex neuropsychiatric disorders.

NMDA receptors are unique among neurotransmitter receptors in that, in addition to glutamate, they require the binding of a co-agonist, either glycine or D-serine. Glutamate and glycine/D-serine bind to structurally homologous clamshell-like extracellular ligand binding domains, glutamate on the GluN2 subunits and glycine/D-serine on GluN1. Agonist binding closes these clamshells resulting in the opening of the central pore of the receptor. Though required for NMDA receptor activation, our understanding of the precise role of these co-agonists in regulating excitatory synaptic neurotransmission, neuronal function, and synaptic plasticity remains quite limited. Nonetheless, significant efforts have been made to clinically enhance NMDA receptor activity though this co-agonist site, either directly by high-dose administration of glycine, D-serine or D-cycloserine (a partial agonist) or indirectly though inhibition of glycine transporters or D-amino acid oxidase. Indeed, evidence suggest that glycine site agonists can improve the debilitating negative and cognitive symptoms in schizophrenia, providing strong proof-of-principle for the therapeutic effects of enhancing NMDA receptor function. Despite the therapeutic potential for enhancing NMDA receptor function by targeting the glycine site, little is actually known about the precise cellular role for the NMDA receptor co-agonist site. Using our single-neuron genetic approaches, we are beginning to unravel this mystery. This work will address the unique roles that glycine/D-serine co-agonism plays in regulating NMDA receptor-mediated neuronal functions, and provide a framework for understanding the cellular effects of glycine site modulation with long-term administration of drugs targeting this site.

Non-ionotropic signaling by the NMDA receptor Provocative emerging evidence suggests that the NMDA receptor can signal in the absence ion flux through the receptor. This non-ionotropic signaling is thought to be due to agonist-induced conformational changes in the receptor, independent of channel opening. Non-ionotropic NMDA receptor signaling has been proposed to be sufficient to induce synaptic long-term depression (LTD), directly challenging the decades-old model that prolonged low-level calcium influx is required to induce LTD. If validated, this new view of NMDA receptor-mediated signaling will usher in an exciting new era of exploring synapse function and dysfunction. Currently, these studies are utilizing the rich and complex pharmacology and NMDA receptors to block ion flow through the receptor in various ways: for example, with a competitive antagonist of the glutamate binding site on GluN2 (e.g. AP-5), with a competitive antagonist of the co-agonist site on GluN1 (e.g. 7-CK), or with an uncompetitive blocker of the channel pore (e.g. MK-801). While still controversial, there is a growing literature suggesting that activation of NMDA receptors can stimulate intracellular signaling independent of ion flux through the receptor. These findings are perhaps not entirely unexpected as the NMDA receptor is part of a large multi-protein complex at the postsynaptic density and is thus at an ideal position to have conformation-based signaling. Indeed, the co-existence of potential parallel ionotropic and non-ionotropic NMDA receptor signaling processes predicts the possibility for divergent signaling events based on agonist and co-agonist availability, channel opening, and receptor subunit composition. Ultimately, further exploration of this model may open a new frontier of NMDA receptor biology and lead to the development of novel approaches for targeting NMDA receptor signaling for the treatment of multiple neuropsychiatric disorders.

Targeting and trafficking of NMDA receptors The functional and regulatory properties of NMDA receptors are largely determined by their GluN2 subunit composition, which is tightly regulated at synapses. GluN2B-containing NMDA receptors predominate early in development and are gradually replaced by ‘mature’ GluN2A-containing receptors. Until recently the dogma in the field was that synaptic NMDA receptors were relatively immobile fixed structures. However, a growing literature has found that NMDA receptor subunits are dynamically regulated in an activity-dependent manner. Indeed, at individual synapses, the subunit composition is remarkably plastic, with the switch from GluN2B to GluN2A inducible within seconds. However, the cellular and molecular mechanisms involved in modulating the synaptic NMDA receptor subunit composition are poorly understood. We have developed an innovative molecular replacement strategy in cultured hippocampal slices from conditional knock-out mice that, combined with electrophysiology and imaging will allow us to explore the molecular mechanisms involved in regulating the subunit-dependent synaptic targeting, trafficking and regulation of NMDA receptors. With this system, we have found that synaptic and surface NMDA receptors populations are tightly and independently and regulated, allowing for hypothesis-driven dissection of the mechanisms involved. We are searching for novel trafficking motif(s) and interacting protein(s) involved in NMDA receptor regulation that will help develop new models and theories explaining the recently-recognized dynamic nature of NMDA receptors at synapses.

Despite decades of research, current pharmacotherapeutic approaches remain ineffective for a large number of patients suffering from psychiatric disorders. While it is clear that psychiatric disorders are a result of the dysregulation of specific brain circuits, medications can globally affect all brain circuits simultaneously. Thus, the field of interventional psychiatry has recently emerged as a subspecialty that utilizes various technological approaches to identify and modulate dysfunctional brain circuitry, including transcranial magnetic stimulation, deep brain stimulation, and vagus nerve stimulation. At the same time in the basic neurosciences, the development of optogenetic and chemogenetic tools have provided scientists with the ability to even more precisely dissect brain circuits involved in specific cognitive functions and identify circuits implicated in neurological and psychiatric symptoms.  This explosion of knowledge brings  great hope for novel, targeted treatments in psychiatry. From a cellular and molecular level, brain circuitry is guided by the synaptic connections among the neurons within those circuits and these synapses are regulated by neurotransmitters and their receptors.  Thus, medications that act through neurotransmitter receptors will likely remain crucially important in the treatment of neuropsychiatry disorders, especially those that affect synaptic plasticity.  By combining the directed and targeted activation of a specific brain circuit with a pharmacological enhancer of synaptic plasticity, the therapeutic benefits of the neuromodulation could in principle be more rapid and longer-lasting.  For example, psychedelics have recently generated tremendous excitement for their potential to treat a host of neuropsychiatric conditions. We have recently shown that psychedelics also rapidly promote long-lasting synaptic plasticity and thus have to potential for facilitating a robust strengthening or resetting of dysfunctional brain circuits, especially in combination with a neuromodulatory approach (which could include some forms of psychotherapy or neurofeedback). A major goal of my laboratory is to understand the basic neurobiology underlying psychedelic-induced changes in brain activity. 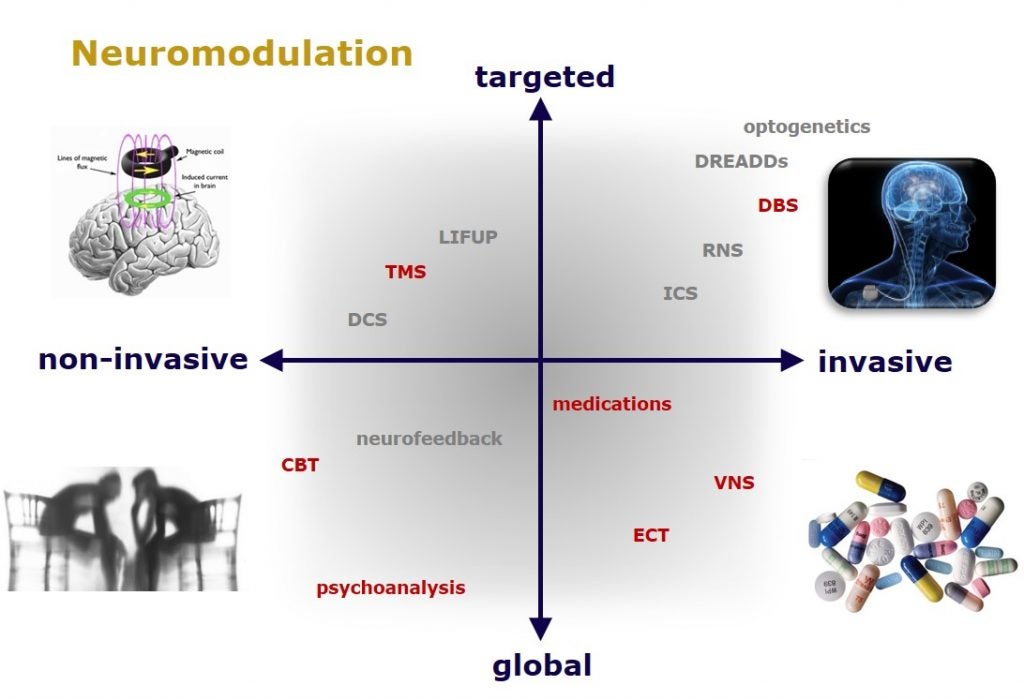